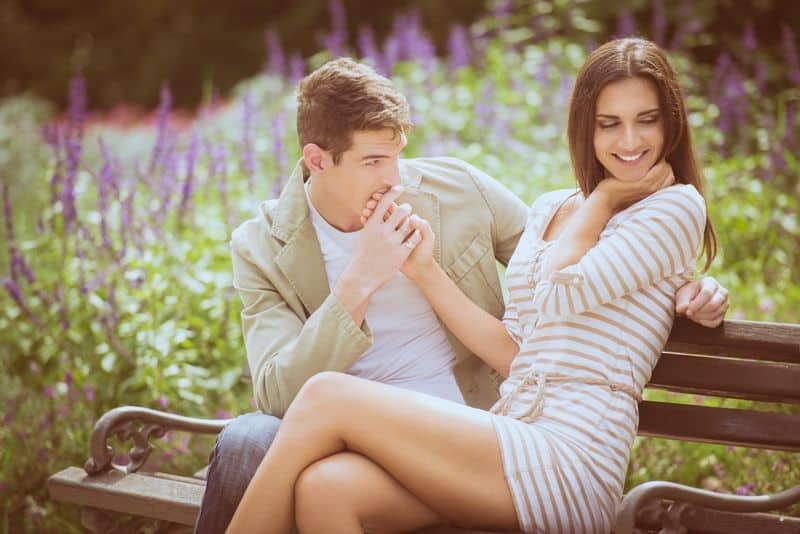 This is probably not news to you but as a lady, you hold all the power in the relationship! Well, at least you do at the beginning.

After a while, it becomes a delicate dance where both of you use the tools at your disposal to try and bend your partner to your will (we’ll talk about that on another day).

What I am trying to say is this: with the right strategy and execution, you can get a guy obsessed with you for as long as you want.

Heck, women have been driving men crazy since the days of Adam and Eve. You are naturally built to capture our attention and bend us to your will.

The answer is simple: most women do not know how to get a guy obsessed with them.

Why Your Strategy Isn’t Working?

I’m going to take a wild guess and say that you are reading this right now because you want to find out how to get guys to be obsessed with you.

Maybe you already have this one guy in your life but he is not quite as “head over heels” for you as you would like him to be.

There is also a good chance that you already have a strategy in place to get him to obsess over you. Off the top of my head I’m thinking you are already:

If you have already crossed that boundary, then you are probably putting down your best moves in the bedroom. I mean you are absolutely riding the guy rugged between the sheets but for some reason, he still isn’t quite there yet. He isn’t obsessed with you.

So what is it that you are doing wrong?

It’s the same thing many women do wrong without knowing it: they give in too easily!

Here is a video that will help you figure out his true intentions:

Read: 5 Clear Signs A Guy Wants You To Chase Him And How To Get Him To Chase You

What Do I Mean When I Say “Women Give in Too Fast”?

Take yourself back to the first time you met the guy. Think about all the little things he used to do back then that he isn’t doing now.

They do all this to impress you and to get you to like so you can…. say it with me ladies – give it up.

Unfortunately, this is true. Men always put on their best behavior to get you to sleep with them.

And that is perfectly fine. That’s how we progress our species.

What I’m trying to say is that you shouldn’t give in too easily.

Just because a guy shows you a lot of interest and always seems to pay attention to you doesn’t mean that you should fall for him instantly.

Unfortunately, that’s what many women do – they quickly fall for the guy who pays them a lot of attention.

Now, I understand, in this world of the internet, social media and very short attention spans, finding a man that pays you any mind is difficult enough as it is but that doesn’t mean that they aren’t there…somewhere!

However, if you give in too easily, he is going to treat you the very same way – as if you are easy!

Here is a video that explains why men tend to lose interest after sex:

The Dynamics of Power in a Relationship

Let me ask you a question and I would like you to be honest with yourself as far as the answer is concerned.

“When was the last time a guy chased after you just so he could be your friend?”

Think about it, as it ever happened? Yes, there are those guys who are just better off as friends but if push came to shove, most, if not all of these guys would rather sleep with you. Not very many guys are okay being “friend zoned” right off the bat.

That only happens after a little while; once things have transpired and you both end up realizing that you are better off as friends.

The original plan, however, was always to get you in bed.

And that is the power that you have. Before you sleep with any guy, they will pretty much do anything you want them to just to get you into bed.

You have what he wants and it’s his job to entice you into giving it to him. That is why you will see men go to great lengths and even fly a woman halfway across the globe just to impress her.

Before you give it up, he will shower you with:

Heck, he will even be a “good listener”. Imagine that!

But then something happens that changes the whole dynamic. You give in!

I understand that it’s very difficult not to fall for this kind of charm especially if you have only been dealing with a-holes who want nothing more than just a piece of your cookie without bothering to even butter you up a little bit.

A guy that pays you so much attention will seem very rare and alluring. It will be very difficult not to fall for him almost immediately. Doing so, however, will lead to the end of that relationship (more often than not).

How to Get a Guy Obsessed with You?

If you give in too easily, he begins to think of you as abundant!

Where he first thought of you as a rare gift from the heavens, once he hits it, you quickly become just another notch on his bedpost. Something he can have whenever he wants. Unfortunately, this is true in a very large percentage of the population.

The answer to that question involves a skill that requires finesse. Something that you ladies have in abundance (there is that word again).

To get him obsessed with you, you have to make him feel as if he is just close enough to his goal not to give up! Does that make sense?

Here is a video that will make it a little clearer:

You see, you need to make him realize that his goal is just around the next corner.

Initially, most, if not every man you meet or who hits on you wants to sleep with you. no matter how fancy they go about it, that goal remains true and is hardly a secret. They will do anything to achieve that goal.

Since you know that, you have all the power. They already showed their hand by even talking to you in the first place. Now your job is to:

How you go about these three things will get him obsessed with you. Once he realizes that you are not just one of those a dime-a-dozen girls who are eager to sleep with the first guy that showers them with attention, he will “up his game”.

You will quickly become a challenge and an obsession.

14 thoughts on “How To Truly Get A Man Obsessed. Women Give In Too Easy To This.”