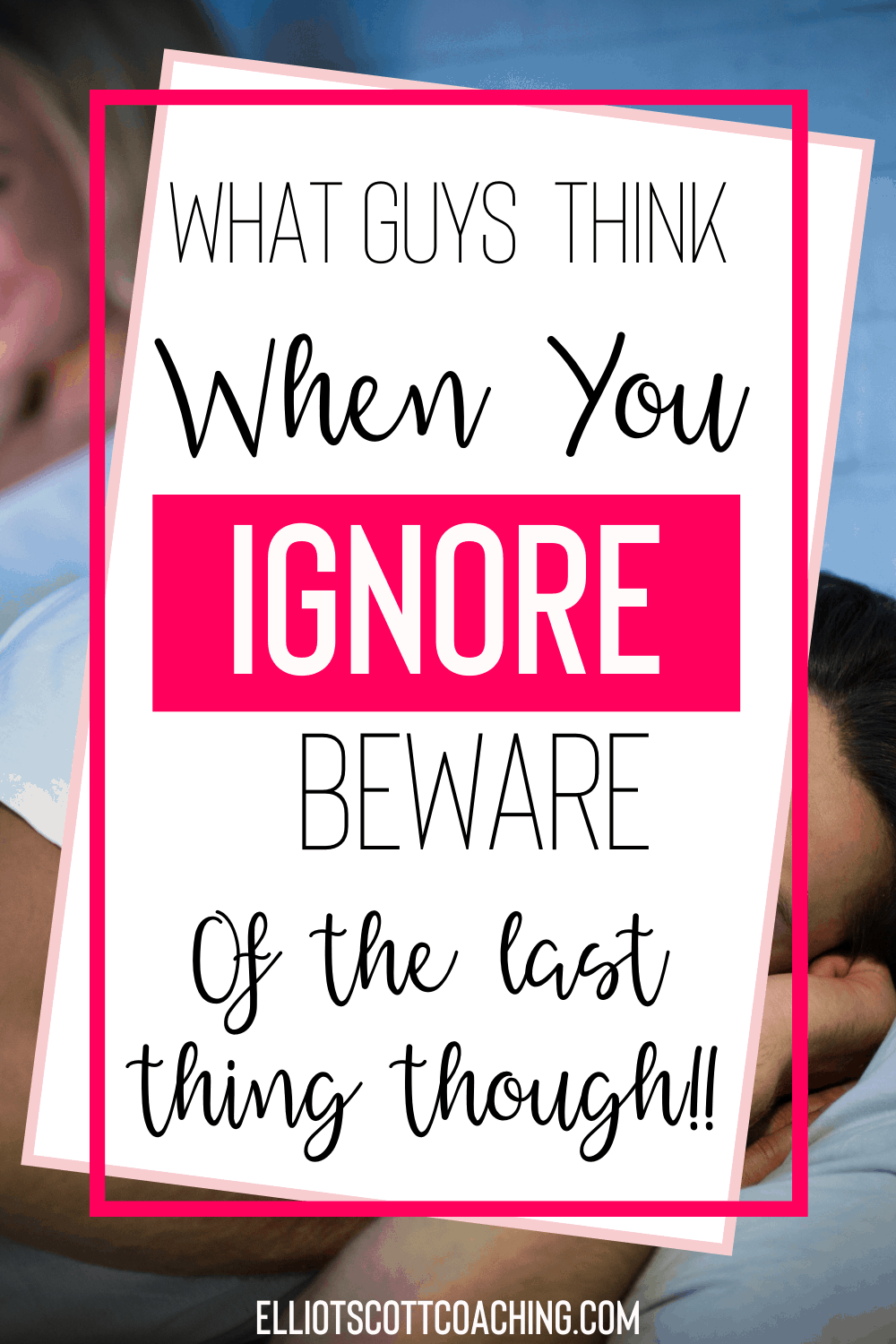 As a dating coach, I heavily study how attraction works and what makes the male mind tick. I come to learn that men get their self-worth and confidence through two things: How successful they are at their purpose or mission in life (or what they add to society) and their personal experience with attracting women. If a man can’t successfully attract a woman, by definition, he’s sterile.

That is where ignoring a guy comes in.

What Do Guys Think Of When You Ignore Them?

What a guy thinks when you ignore him is based on how much he likes you and what his intentions were with you. If he liked you a lot and you ignore him suddenly, it’s going to hurt. He’s going to dwell on it and think about getting you back. Especially if you were a source of validation for him.

The most common traits that dictate what goes through his head when you ignore him are the following:

The two MOST important things that dictate what goes through his head though are his interest level and if he’s able to fill the void again.

Women a lot of the time want to get revenge on a guy by ignoring him so he realizes what he’s losing. However, while that may work, if the guy was pulling away anyway or doing things that caused you to ignore him, how much will ignoring him actually hurt?

That doesn’t mean you shouldn’t ignore him. If a guy is taking advantage of you and you spoke up about the realistic standards you’d like him to meet such as not going large gaps of not communicating, and he doesn’t do it, it’s time for you to pull back. He will take you for granted if you don’t.

Here is my infamous chart I use for the TIMING on when to pull away. I am posting it here because it is still in correlation with the amount of attraction he has for you: 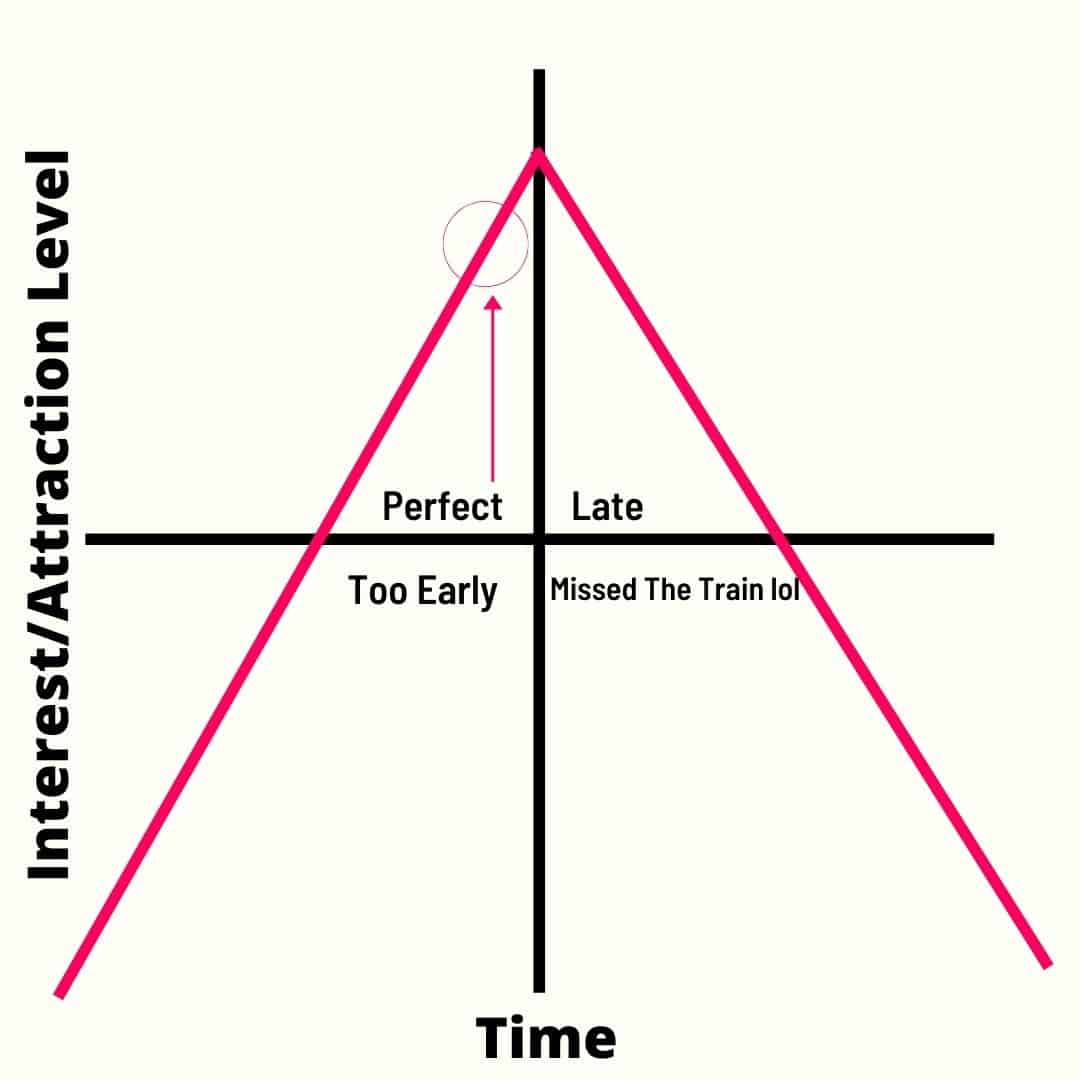 You obviously always want to pull away when his attraction is strong for you. THAT DOES NOT MEAN TO PULL AWAY JUST TO PULL AWAY. THAT IS DRAMATIC AS HELL. Only ignore a guy and pull away if he’s playing some bullshit game, you called him out, and he is still playing games. Ignoring a guy should be a last result type of action.

I usually like to attraction in 3 types of categories (there could be 5 but this is easier for you to understand):

If you decide to play mind games and ignore a guy, you need to know that it will only work on men between 52-79%. The higher the number between those two digits, the more effective it will be. However, I learned that it gets to a point where the higher the number, the less likely him pulling some stupid crap is going to happen. For example, I don’t see a guy at 79% interest level playing a lot of games.

Here are the kinds of results that you can expect to get:

You’re probably thinking/reflecting on all these amazing things this guy did in the beginning which made you believe he is so amazing and interested in you and now you’re wondering why he’s acting differently all of a sudden. For that, I want you to read this article. It’s very important:

MUST-READ: Why Men Ignore You All Of A Sudden Out Of Nowhere

Here is a little reality check for women who think their guy is super interested just because of stuff he did before and not now:

MUST-READ: He Likes You But Does He Appreciate You? Here Is Why Not…

Based on how much a guy likes you, it goes through steps or stages. If he likes you a lot, he will immediately go through the steps on how to get you back. Maybe he took you for granted, wasn’t sure what he wanted but liked you, or other things.

If a guy didn’t’ like you that much or wasn’t sure what he wanted with you in general, there are going to be more steps. The reason there are more steps is due to more liabilities. What that means is the guy is thinking, “Is this thing we have worth reinvesting in?”

Simple I know but it’s very powerful All attraction is based on these two things. If you’re interested in maximizing assets or even knowing what are the top assets for men while lowering the liabilities that keep him from committing, I HIGHLY suggest you check out my course Attraction Academy.

It goes into great detail on everything dealing with building lasting attraction.

To help you understand better what men think about when you ignore them, I developed a little chart: 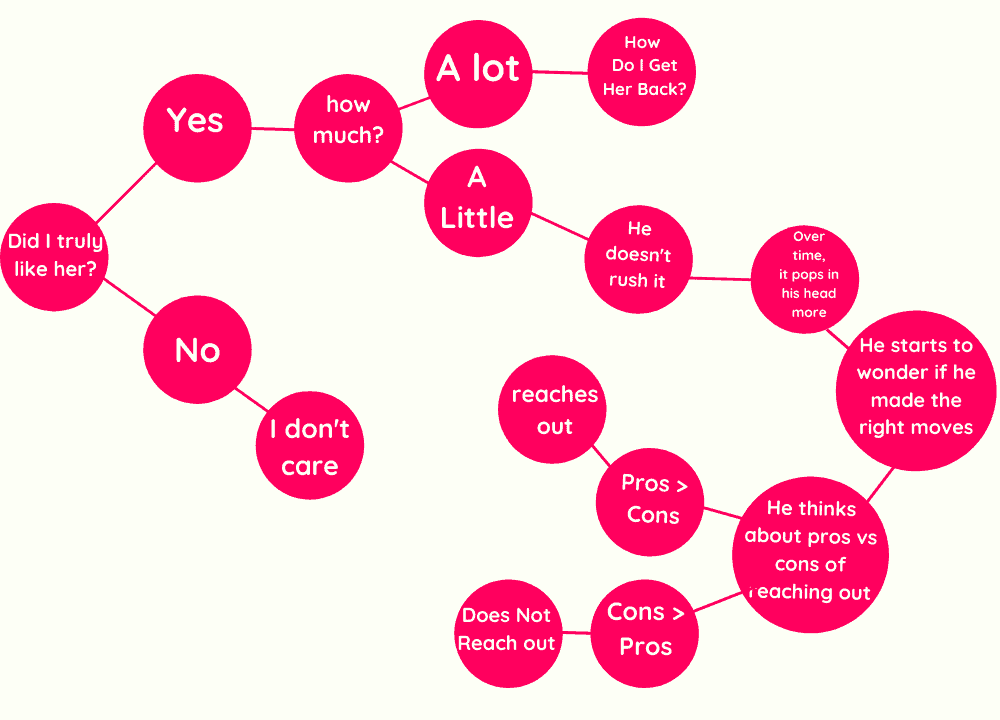 It comes down to attraction! I have seen plenty of times where ignoring a guy works. I would have clients come to me ignoring a guy and I tell her she’s doing it all wrong. With a couple of fixes and pivots, the guy ends up coming back within a month. However, I have seen ignoring a guy not work in the woman’s favor. Either her timing was off, the attraction was too low, or she ignored him to get a reaction out of him and get him back.

Listen ladies, I know you’re not going to like this because 99% of you are here for this exact reason:

If you’re ignoring a guy in hopes to get him to realize your value and come crawling back, you already lost. That is not the reason to ignore a guy. The reason to ignore a guy is to cut him out of your life because you’re a high-value woman. High-value women don’t ignore dudes who don’t notice a good thing when it’s in front of them in the hopes to get him back. Desperate women who don’t have options do.

I know that is harsh to hear but the reason it doesn’t work is basic psychology: people don’t change as fast or as easy as you think they do. The mind always goes toward the path of least resistance.

The means if you think ignoring him is going to change his behavior, it’s not. How does that change his behavior when all he had to do is say sorry, invest more, and he got you right back? Remember, you don’t ignore a dude as the first line of defense. It’s the last option. You already put up with his crap. You already called him out for his mind games, You already questioned him on why he’s acting differently. After all that, if he is still pulling some crap to the point where you have to ignore him, I don’t think ignoring him is going to fix the problem. At least if the attraction is low. If the attraction is high, it is a different story. But that is a small minority of you.

I guess you will have to ignore him to see.  Either way, it’s worth ignoring the guy if he can’t communicate, be honest, or uphold your basic request.

I just don’t like women ignoring men to get men back because it puts you in a weak position of negotiation. You may have this hard outer shell where you displaying power by ignoring a guy but that is just a mask. Deep down you wan the guy. however, what about what he wants? He is already playing games to the point where you ignore ehim so how bad does he actually want you? He ain’t wearing no mask. If he did come back after all that, I am willing to bet it’s more for his personal gain than it is an actual relationship. As I said earlier, men just don’t wake up one day and change. At least, the average guy doesn’t.

With that being said, I think I touched heavily on what a guy thinks when you ignore him. It’s based on what he gets out of reaching back out and his actual attraction for you. If he likes you, he will go crazy. If he doesn’t, you’re probably doing him a favor.

215 thoughts on “Discover This CRAZY WAY Guys Think When You Ignore Them (Especially This Last One!)”