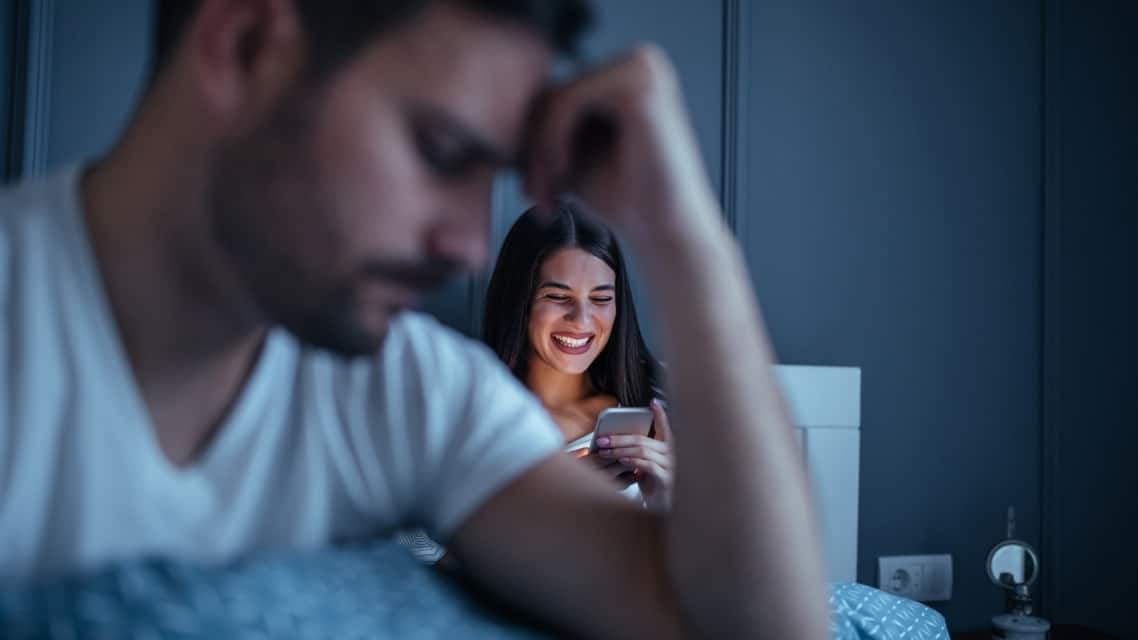 You pulled back. You remained silent. He has reached out several times but you stood your ground and didn’t send a reply. You know if you reply and start talking to him again, he’s going to pull the same crap he’s been pulling for the last several months. You want a change this time! You want to regain power! You want your silence and choice of ignoring him to mean something! Well, you’re in luck. By popular demand, I am going to make an intensive guide on how to properly ignore a man. If you understand what I say in this article, you’re going to increase your chances of regaining power and attraction.

My Definition Of “Ignoring” A Man In The Dating Scene

A lot of women don’t know what it means to truly ignore a guy. It’s the same rule I have with no contact:

You’re pulling away 100% of the time and NEVER REACHING OUT AGAIN unless he does. That means if he doesn’t initiate, you’re never going to hear from him again.

For you who still don’t understand (because I have to repeat this philosophy a lot in my line of work):

This does not mean you follow anything taught by other dating coaches where you leave for two weeks or a month then you come back around and reach out. Nope. You’re done on your end. You quit investing because you’re not getting what you want out of the relationship. This is no coming back around. You burnt your end of the bridge and if he wants to talk to you, he better start patching up that bridge.

Ignoring also means that the man must now invest more resources to get back to neutral. I don’t like thinking of this as a way to punish a man but at the same time, how else is he going to take you seriously if you ignore him and then he comes back with some bread crumbs? Don’t let him in just for reaching out. You told him several times before this what was wrong and he still refused to fix it. Therefore, obviously, that same frequency./consciousness isn’t going to cut it.

Lastly, Ignoring a guy is a way to cut out the bullshit and move on. It’s not a way to communicate. It’s supposed to be the end result. Don’t pull some passive-aggressive hissy fit.

Only ignore a guy if he’s disrespecting your REALISTIC standards after making them clear more than twice.

Let me elaborate on what “realistic” is to me. I feel like if I don’t, you all are going to just ignore men for whatever reason.

Realistic to me means something sustainable, fair, and logical for both parties. If you’re upset he’s not replying fast enough, that’s on you. Don’t ignore him just yet. If you’re mad you’re not hearing from him every day, that’s also on you.

You’re fine if he doesn’t reply right away. It’s okay to go a day without hearing a from a guy. Even more, if you’re newly talking or long distance. In fact, I feel you’re going to do more harm than good by trying to fix these little things early on.

So, what are some reasons to ignore a guy then? Well, first I want to say you should focus on context. This means the overall picture and how everything you two do and say creates what I call layers. For example, it’s okay to go a day without hearing from a guy. It’s not okay that when you do finally hear from him, it’s a small shitty text, and on top of that, he canceled your plans the other day to meet because he forgot he had an important meaning. You need to nip this in the ass right away even if that means losing him.

Focus on context layering. If you want more detail on this topic, I highly suggest you check out my course Attraction Academy where I talk in detail about this kind of stuff. Context is the most under-utilized and overlooked concept I teach. I feel that women’s lack of awareness of it is the number one reason why they get into all their crappy situations with men.

To summarize, only ignore if:

Reasons To Not Ignore A Guy

You should only be pulling away to demonstrate standards and to cut off the bullshit. I read my YoutTube comments section and have women tell me,

“Actually Elliot, it does work. I had a guy come back to me after I ignored him.”

A guy coming back versus a guy coming back, changing his ways, and wanting a relationship are two completely different things. Especially if you take him back easily. Usually, a guy comes back for the following reasons:

That is why I say the only true way to know is effort over time. He needs to come back and understand why you’re ignoring him.

I am not saying he needs to beg. Screw that. Most men won’t. He does need to acknowledge though what he did wrong and verbally/textually tell you that he is going to change. For me, that’s enough. I know I said earlier that he needs to put more effort in but I think him giving you concrete communication saying, “I know I did X wrong and I am willing to change” says a lot. That makes it very black and white. It’s either he’s going to step it up or not. It’s easy to measure.

This begs the next question:

How many chances should you give him? What if he says this stuff but doesn’t change?

You already talked to him about it twice before actually ignoring him. Then you ignore him, he comes back, says he’s going to change, and then doesn’t change….He’s out. Do not give him any more chances. Don’t even give him the time of the day in explaining that you’re pulling away. Obviously, this guy doesn’t care and can’t communicate so you’re just wasting breath.

If you stick around even slightly after this, you will never get anything from him. He will take you for granted and just drain you of resources.

I hate blaming women for these types of things but I only do so because I talk to women constantly and hear them say that they know what’s going on and verbally communicate to me that they know how the situation is unfolding. Yet, they continue to partake in it.

Putting psychological issues aside because I do know that plays a part in it, if you know he’s playing you but you stick around in hopes he changes or because you really like him, you’re asking for trouble. You’re giving him the stage to perform his routine.

Why do you women do that?  Have some self-respect. It’s hard for me to feel bad for you when you see the “BEWARE OF DOG” sign on the fence but because you love German Shepards, you want to put your hand over and pet it anyway.

Once you establish he’s a player, asshole, no looking for the same thing, or unable to invest, you need to move on.

MUST-READ: What Do Guys Think When You Ignore Them?

How To Bring Up Your Standards Correctly

This may be one of the more difficult parts for you because you believe that bringing them up will scare him away. Here is the thing though:

If he does pull away because of it, he was going to do it anyway. Trust me. A man who truly likes you won’t pull away over something this simple. He’s pulling away because:

Please just trust me when I say a man was going to pull away anyway. I don’t know why women find that so hard to believe. A man never pulls away over just one thing so you calling him out over these things that HE’S CREATING is childish and ridiculous.

Depending on the severity of the situation, I believe it should be light, short, but direct. I hate when women tell me how to bring it up, how to word it so he doesn’t pull away, or some bullshit like that. Your job is to get your standards met and to let him know what is bothering you. Not to sugarcoat things out of fear of losing him. That’s already a losing battle before going to war!

Since I focus more on attraction and not these type of issues (plus I am more cutthroat and carefree than a lot of you which isn’t a good thing in this situation), I am going to link articles in which I find helpful:

Common Questions On Ignoring A Guy

I answered all the questions I am about to go over already but some people need it to be sticking out right in front of them so here they are:

What if I ignore him and he comes back? What do I do from there?

There are two things on your end you must do:

If you do those two things, you’re already better off than you were.

What if I ignore him and he comes back and says all these sweet things but then later starts the crap again?

He’s out forever. IF YOU GIVE IN THEN YOU HAVE NO SELF RESPECT AND HE WILL NEVER CHANGE. hE KNOWS HE HAS YOU.

Some people are just not in the place for relationships. This guy obviously isn’t it. He had one chance. You gave it to him. He’s out.

What if I never hear from him again?

Good! It saves you a lot of time. He’s just a guy. Get over him.

When I tell him he’s wrong, he flips out on me and manipulates me. What should I do?

A relationship takes certain traits to maintain. Communication and problem solving are just two of many of them. If he’s already not meeting your realistic standards, that’s a problem. Then when you try to talk to him about it he’s arguing to win?!?! He’s out.

What do I say when he reaches out to me?

You don’t say a damn thing. Let him sweat for a bit. Let him miss you. Even if that means losing him. When he’s ready to change, he will let you know. Then you need to tell him what you’re looking for, what you’re not going to put up with, and what you two as a couple need to work on.