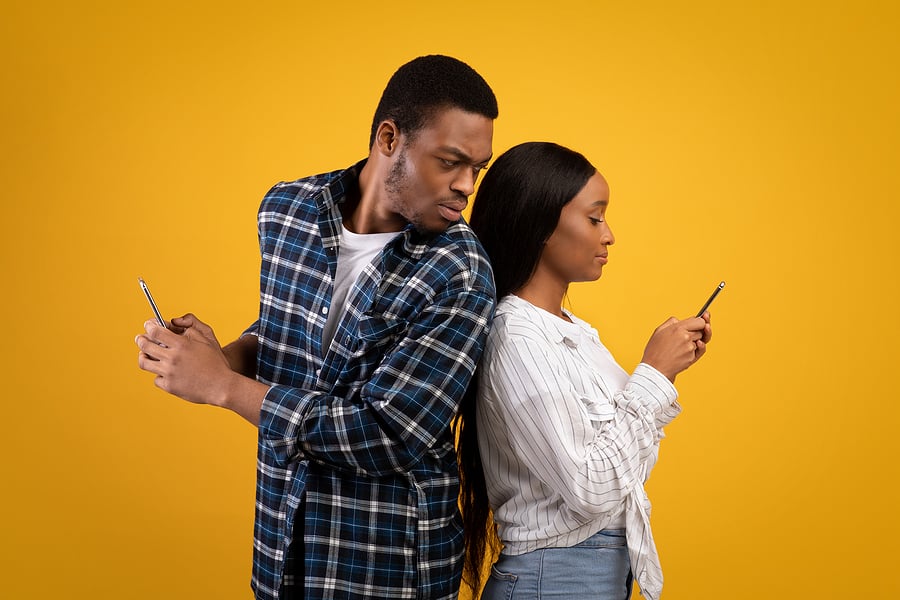 While I don’t think women should go out of their way to make a guy jealous, sometimes, it’s needed.

There are men (and women) who take you for granted and the best feeling in the world is to know they still care due to seeing signs of jealousy.

In this article, I am going to go over 5 signs that not only show he is jealous, but that he still likes you. These are going to reveal his true feelings.

5 Unavoidable Signs A Guy Is Jealous And Likes You

Now before you click off, please read my insight below on each of these bullet points because I think they’re going to give you more depth and a better understanding of what he’s thinking.

I believe these to be VERY accurate once you read what I have to say about them.

MUST-READ: Why You Should NEVER Chase When He Pulls Away In Order To Get Him Back

A Jealous Man Changes His Behavior Due To A Threat

People underestimate this one because they don’t understand the true definition of jealousy:

That means he’s upset not only because he may like you but also due to the assets you offer:

So if you see a guy getting very upset, it’s important to understand that he’s making it clear that knows there is a threat to the assets he currently has.

I go into way more detail on these kinds of things in my course Attraction Academy if you’re interested.

Jealousy Makes Him Protective He And Guards His Assets

To branch off the stuff, I said above, if he knows there is a threat to his assets, he is more likely to become protective over them.

It’s important to know why assets are assets to men. Why are men attracted to the stuff they’re attracted to?

It comes down to the evolutionary goal of the organism: To survive and reproduce.

MUST-READ: How To Make A Man Miss You And Come Back To Chase You For Good

To survive means to get advantages. To reproduce means to get validation from a woman in order to reproduce (that doesn’t mean he wants to have your babies. It’s just the way the brain is designed to think due to our past).

They want to see you do good, but never better than them.

To survive, men need to have advantages over other men in order to have their pick of the best potential mates (you).

To do that, men focus on resources they can provide (time, energy, effort, money, investment, etc.), status, and abilities.

If you know this, then you see why some assets you offer are stronger than others. For example:

You get the picture.

What I am trying to say with all of this is of course a man (who truly values you and likes you) is going to become protective over you. Not only because he likes the assets but also due to not wanting to give this advantage over to another man.

Jealous Men Start To Invest Heavily Or Not At All

We all know about the guy who is jealous so he steps up his game. I believe after reading this far, you understand why.

What about the guy who completely shuts down though? The guy who pulls away.

Why does he do that?

There are several reasons for this and they all (in my opinion) have to do with self-esteem and ego:

MUST-READ: How To Get A Guy To Stop Ignoring You In 3 Easy Steps

Women will come to me and wonder what is happening because she tried to make him jealous and he’s acting completely different than what she expected.

The above is usually the reason.

The other reason he’s pulling away and not making an effort is he believes the assets are not worth the liabilities and you making him jealous isn’t worth chasing. He rather go find someone else.

He Starts To Be Aggressive And/Or Play Detective

A guy snooping around is something we are all familiar with. I know you know this because you’re probably a snooper yourself.

That is okay as long as you respect someone’s privacy. We hate being in the unknown.

When a guy gets jealous, he can be aggressive and use scare tactics to keep you around or to scare other men off.

That doesn’t always mean he has to be intimidating.

Sometimes, it comes through drama.

For example, baby-mama drama. A lot of men won’t go near a woman who is having drama with her ex because the assets are not worth the liabilities.

When it comes to playing detective, you know he’s asking around and checking things obsessively:

He starts to play detective. Why? Because he wants to protect his assets!

He hates being in the unknown. He’s going to do what he can to gather intel and see if he needs to invest more or start looking for another woman.

WARNING: Jealous Men May Call Your Bluff And Make You Jealous

99% of the time, I don’t recommend women go out of there way and try to make a guy jealous because there are four main reasons why you do it:

And guess what? that makes you outcome dependent.

A lot of women try to put on that IDGAF mask. That, “I don’t need a man” mask. When in reality, you’re doing it in hopes he returns and doesn’t take you for granted. You do it because you like him and still want to be with him.

Some of you will even say, “Nah, I don’t even like him. I just want him to realize what he is losing.”

Okay…I get that but what if he turns it around on you and makes you jealous? What if he doesn’t react the way you wanted and instead, he’s posting a picture of him and another girl due to you posting a pic with a guy last week?

How’s that going to feel?

That doens’t mean he’s not jealous but men like variety.

Two of the assets men like are options and security and if you’re making him jealous, wouldn’t it be smart for him to talk to someone else?

I personally don’t tell the girl I am talking to (not dating) but if she goes out of her way to make me jealous, I assume she’s petty and I IMMEDIATELY start looking for other women.

MUST-READ: Why Your Boyfriend Is Flirting With Other Women

Because she’s petty. Why would I want to be a part of that? Especially if she’s doing it for no reason. Too many women come to me wondering how to be scarce but don’t realize when and when not to do it. You don’t be scarce to be scarce. You be scarce because he’s taking you for granted and you’re done with it.

Trust me, if he tries to make you jealous back, it’s going to hurt you more than it hurts him.

Let me know what you all think. Do you have success with making a guy jealous?