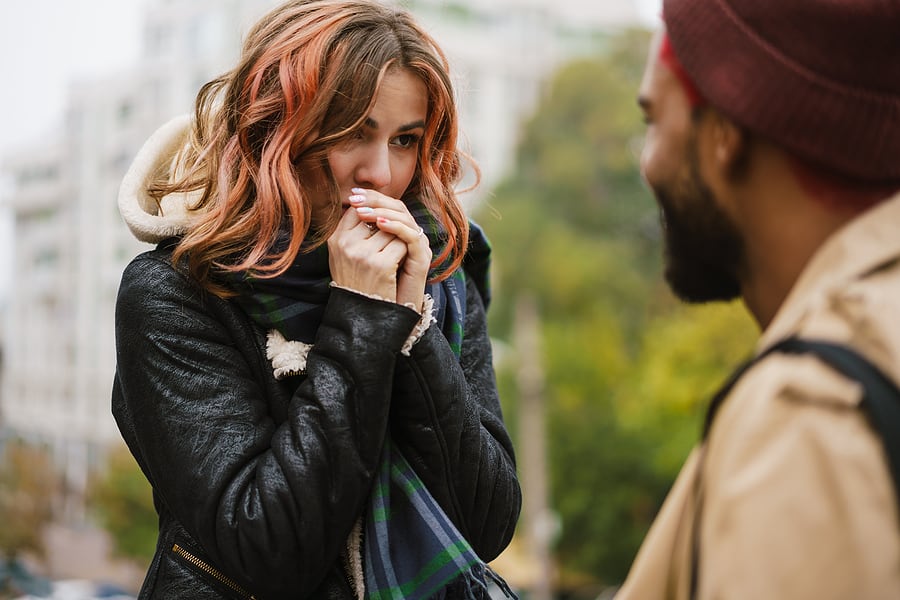 We hate wasting time on people who aren’t on the same page as us. We also hate being lead on and in the unknown.

Because of this, we want to ask someone what their true intentions talking to us and if they want a relationship. However, doing so may freak the guy out. If you talk about it early on, the guy can assume you’re needy and you push him away.

In this article, I am going to go over why pushing him away is probably the best thing and saved you a lot of time.

It doesn’t matter how you ask him just ask him. If a guy truly likes you and wants a relationship, asking him won’t push him away. A guy will only be pushed away or assume you’re needy if he wasn’t sure about a relationship, didn’t like you, or was emotionally unavailable.

MUST-READ: How To Get A Guy To Chase You And Beg To Be Your Boyfriend

I hate women asking this and expecting me to give them word for word what to say.

if you have to say something in a way to prevent him from pulling away, why are you even talking to this guy? You’re already out!

Let me emphasize some things.

It is important to know that if a guy TRULY liked you, it wouldn’t push him away. The fact that you’re asking for clarity seems to be a deal-breaker to the guy is nuts. No one thing will push a guy away.

If a guy likes you, where this thing you two have is going, and enjoys your time, WHILE looking for a potential relationship, why wouldn’t he want to hear that you two are on the same page?

The ONLY reason is pressure.

But it’s VERY important to know that pressure would only be created if he wasn’t sure what he wanted or not looking for a relationship because then he would feel obligated to owe you something. However, if he has the potential to give you what you want and actually likes you, why would asking him push him away? you’re asking him what he’s looking for…not if he wants your babies…

The thing that pushes a man away is context and even then, that’s if he’s not ready for anything serious. I have a video below that goes into detail on this theory.

I know you may ask, “Well, I want to ask early so I don’t waste my time. Wouldn’t that come off needy? He doesn’t know me well enough to want anything but I can see where it comes off strong.”

Three things I have to say about that:

So Should I Ask A Guy What He Wants Or What Are His Intentions?

I am going to contradict myself here a bit and say…

Don’t bring it up.

There are several reasons I say that:

I like how women think that just because she asks, it means the words that come out of his mouth are always honest and genuine.

Should he be honest and genuine? Of course. He’s an ass if he’s not.

However, a lot of men will justify that they are being honest (more on that in a bit).

I am just stating this because if you’re worried about coming off needy by asking yet you don’t know for sure you’re getting a truthful answer, why ask to begin with? I hate to say this assuming people are evil and manipulators but they are. It’s hard to explain to women because he’s tricking himself into justifying why what he’s saying is honest.

This is one of the traps a guy gets you in and I hate calling it a trap because it’s not. It’s just something women don’t comprehend.

A lot of you assume automatically that if he is looking for a relationship and talking to you that you’re relationship material.

That isn’t always the case.

There are a lot of women I talked to in my life where during that time, if the right woman came along, I would commit. Although I liked her and thought she was awesome, I didn’t feel she was the one.

So a lot of you may ask then:

“Well why didn’t you let her go you piece of crap?! You lead her on!”

This is where I talk about guys justifying things. It’s not as easy as you think.

But because a lot of men (including) myself weren’t talking to other women on the level I was with this particular one, it’s hard to disregard her as “nothing” when I am feeling “something” still.

Men are risk-avoidant and you can call me a horrible man but I am not going to stop talking to someone I like simply because in that moment in time I am not sure.

STORY TIME! I remember back when I was 15 there was this girl I really liked named Kayla. We were good friends who hung out in the same friends group. She really liked me and made it obvious. I saw her as just a friend. However, the more we hung out, the more I opened up to her, got comfortable with her, and actually started to like her. It was summer time and she signed my yearbook. She left this page long note in there before leaving on a month trip to South Carolina (where she’s from). The whole time she was gone, I kept reading that note over and over. I remember my friends and I were playing in the street when we saw her white van pull up in the drive way. She got out and I saw her differently. I started to REALLY like her. Things where different after that.

So feelings can change. Does that mean you should wait around in hope they change? Absolutely not! 6-8 dates or weeks then you’re out. If not, most guys will take advantage of you in these situations. I was justifying why some men hold on.

MUST-READ: How To Get A Guy To Take You Seriously When You Pull Away

To sum it up, yes, most guys want something if it’s the right woman. Just because he’s talking to you doesn’t mean you’re the right woman though. Don’t assume him to just let you go. He probably does feel something. That is why it’s up to you at 6-8 dates or weeks to cut him off. If not, he will probably take advantage of you.

I remember a girl asked me early on if I was looking for a relationship and I said yes. She asked if I liked her and I said yes. As we continued to talk, I didn’t like her as much and broke it off. She thought I was using her and the biggest piece of crap in the world. I told her I would be the biggest piece of crap if I kept talking to her and lead her on which I didn’t.

A guy’s feelings can change so why ask so early?

Why not just focusing on building attraction? I always say:

Focus on having fun and hanging out. Give him an ultimatum at 6-8 dates to save yourself time.

Can he want a relationship? Yes.

Can he even want one with you? Yes

Can all of that change over time? Yes

Asking too early gets your hopes up and you don’t know how sincere he is. Trust me, this dude doesn’t know what he wants. Just focus on building attraction and getting him hooked. That is why you need to check out my course Attraction Academy. It gives you all the tools needed to hook a guy for good.