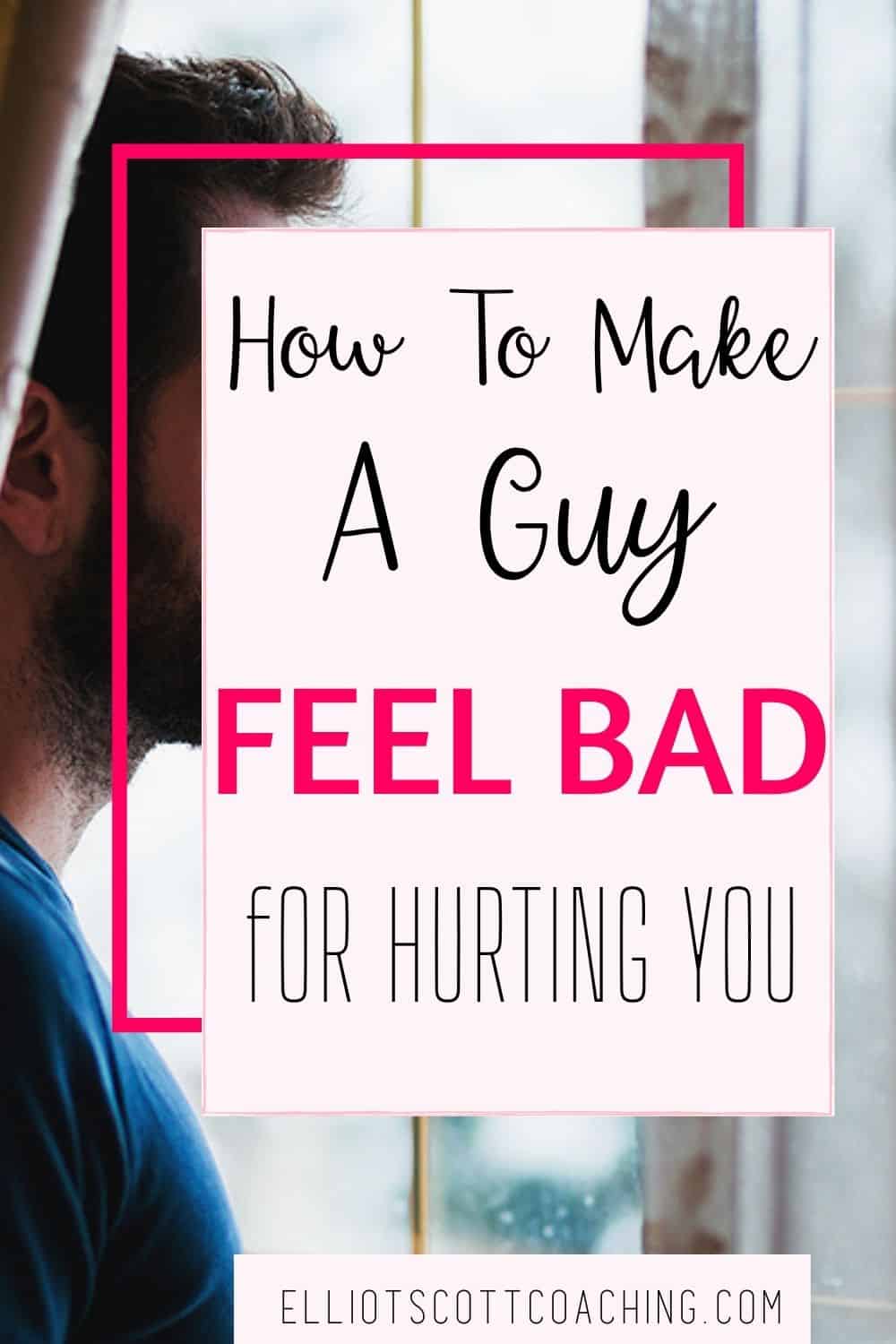 Do you want to know how to make a guy feel bad for hurting you?

I don’t think you’re a bad person for wanting to do this. We all have been hurt by someone we love and want them to know how bad they hurt us. It’s human nature.

While I don’t agree with everything I am about to say in this article, the things I discuss will make a guy feel bad for hurting you and let him know how you feel.

How To Make A Guy Feel Bad For Hurting You

There are 5 things you must do to make a guy feel bad for hurting you. Those things are:

Trust me, this is powerful stuff. I know you have read these things on the internet and they sound like common sense but if that is the case, why don’t you follow though and do them?

See, the problem is the fact that you want to make a guy feel bad for hurting you. Your ego and pride are still involved.

That’s okay. That’s normal. However, you’re still attached. You’re still outcome dependent. No, you may not like him as you did but you’re still tied up in all the bullcrap while he’s making you an option hence why he hurt you in the first place.

Don’t worry though, I am going to go into detail on why these 5 tricks work in making a guy feel bad who hurt you.

In my other post called, “How To Make A Guy Jealous Who Doesn’t Like You.” I talk about how a guy like you isn’t necessary if you want to make him feel jealous for leaving you.

I mentioned how men are very egotistical creatures and the fact that you’re taking away his resources (despite him being the one to leave) has a powerful effect over time.

The reason for this is how women usually react when a guy breaks her heart:

She will be upset and hopes he returns. Sometimes, she will beg and try to convince him to come back around.

However, you can’t negotiate attraction.

You can only build it. However, the fact that a lot of you stay around, hoping he will change his mind don’t realize that he will take advantage of these types of things. He may:

Instead, learn to take the assets that he wanted and invest them elsewhere. Even if he doesn’t like you, HE STILL LOSES THE ASSETS. The biggest problem I see a lot of women have is they don’t do that. they don’t cut him off from the assets. Then wonder why he’s not committing.

Assets equate to advantages in the evolutionary world and the world of attraction.

If you truly want to make a guy feel bad for hurting you, you’re not going to do that by sitting around making yourself a viable option.

Take those assets and invest them in another man. Better yet, just make him realize he doesn’t have them.

Does he even worry about losing you yet? Have you actually gave him the chance of missing you? Or does he know he can have you at any time he desires?

Call Him Out For Hurting You

Some women are so passive aggressive that the only way he needs to avoid it is to ignore you.

I also know a lot of women who are afraid of calling a guy out because she’s afraid it will push him away further.

If the guy did you wrong, call him out on it. The two reasons guys do what they do to women are

Even if it pushes him away, let it be known how you feel. If he has any sort of empathy or has had his heart broken before, he will sympathize with it. Doesn’t mean he will come back, but he can relate to it at least.

If he did something scummy such as lead you on, you need to call him out. Make sure he realizes what he did so he doesn’t do that to other women.

I tell a lot of my clients that the reason the guy hurt you (in a scummy way) is due to the fact that not only is he just a horrible person but he did it to women in his past and got away with it.

No one called him out!

Because of this, he doesn’t see the damage he’s done. He’s only perceived it through his own lens.

The thing that irritates me the most as a coach is the fact that women stick around hoping these dudes will change despite him treating her like crap and it being obvious this is just who he is as a person.

How is he going to learn his lesson if you don’t cut him off?

How is he going to feel bad if you stay around responding to his text?

If a guy is treating you like crap and you stick around because you have such low standards that you want this type of guy, why wouldn’t he keep doing it?

Replace Him With Someone Else

I know you may think this doesn’t work since the reason you’re hurting is he left you but that’s not true.

If he sees that you are over it and talking to someone else, that means he is cut off from you. It is the symbol of you cutting him off that is powerful.

Men fight among under men in a competitive nature to attract women. Men think that if I have her, she’s mine and off the market. The fact that he let you go and you started to talk to someone else to take his place means that new person is getting the assets not him.

Stop Caring What He Thinks

I know you like him but he hurt you. Whether it’s by leading you on, dumping you, or whatever. It’s obvious it’s not meant to be.

Stop wasting time on a dude who is making you an option.

It makes me upset when I see great women who get treated like shit still wanting to be with this guy and they’re only making him jealous in hopes he realizes what he lost and comes crawling back.

The fact that you care what he thinks will always put you in a losing position.

Because you’re outcome dependent. You have no room to negotiate anything and then wonder why this keeps happening to you.

It’s all about standards.

Uphold those standards. if he falls short, that’s on him, not you. Stop caring what these dudes think when they can’t even put in the effort in the relationship.

If you want real help, my course Attraction Academy will get you there. No jokes. All the information you need about men, their psychology, why they do what they do, and how to get them to love you on a deep level is in there.

276 thoughts on “5 Genius Ways On Making A Guy Feel Bad Who Hurt You (Warning: Powerful)”